How to convert WAV to MP3 online 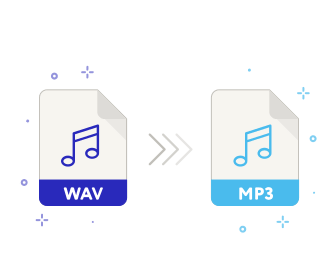 WAV (or WAVE - Waveform Audio File Format) is a digital audio format that is a media container. It was developed by Microsoft and IBM in 1991. It is the main audio format used in the Windows operating system, although it can be played on any platform - WAV support is present in most music players. Also, this file was widely used for recording Audio-CDs.

Technically, a WAV container can contain both compressed and uncompressed audio. However, its application is most common for storing music without loss of quality. As a consequence, the size of such files can significantly exceed other popular audio formats. Due to the large file sizes, files with the .wav extension are not very popular for sharing music on the Internet, unless it is necessary to transfer the file in its original form (lossless).

Files with the .wav extension can be played on a computer and other devices. Most music playback software supports this format. And despite the fact that there are more popular formats, WAV is still a good alternative for certain tasks.
File type: Audio
File extension: .wav, .wave
Developed by: Microsoft & IBM
Initial release: 1991
MP3

MP3 (MPEG Layer 3) is a digital audio compression format that is currently the most popular audio format in the world. The appearance of this type of audio file can be called a small revolution, because .mp3 files have a very high compression ratio while maintaining excellent sound quality, and it also uses a very complex mathematical algorithm for encoding a file that does not look like classic compression containers.

The MP3 format was specially developed for the Internet and gained popularity in the late 90s and early 00s. The small file size made it possible to quickly transfer it over the network, as well as write a large number of files to CD-ROMs and MP3 players, which had rather limited disk space.